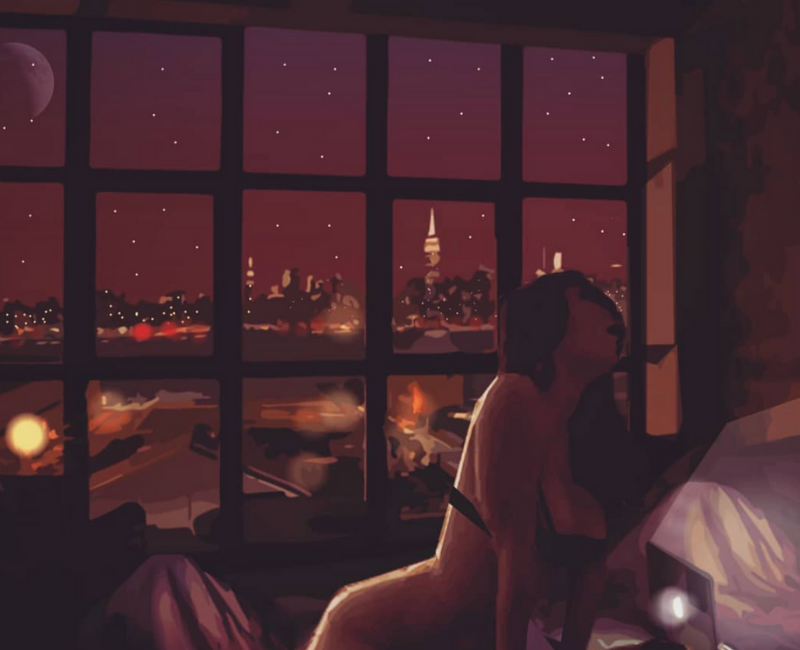 When did you decide to start sharing your art on Instagram? And how did it go in the beginning?

I remember that it was not a good period of my life, while I was attending the second year of the Comics school in Rome and it was already for a long time that close friends pushed me with emphasis to publish them.

At that time the first drawings with the lyrics of indie songs were born and it was also a time when there were very few illustrators in Italy who had a page dedicated exclusively to that genre.

I also remember that most of the instagram pages they published and that had a large following made exclusively a collection of works by various international artists and so listening to those tips I said to myself “why not?”

What feeds our most hidden and intimate fantasies is sometimes evoked by a song, which perhaps reminds us of an exact moment in our life or a moment in the past while we were in the car with that girl, the rain was beating on the windows and the radio passed Steve Wonder.

Or for example from the scene of a film where we identified ourselves maybe the night before while we were on the sofa with that person we can’t resist.

My favorite movie is 1969 Easy Rider starring Henry Fonda and Dennis Hopper. I have a great fascination for that historical period and for the cult of the pursuit of freedom, both on a cinematographic, political and literary level.

It has always fascinated me in the concept of freedom and its deepest meaning. In the film there is a moment in which the two protagonists talking to each other say:

“… But talking about freedom and being free are two different things …” here I find it very relevant even 50 years later.

As for the cinema, my favorite musician is also part of that era and is John Fogerty frontman of Creedence Clearwater Revival one of the most influential but at the same time least known groups.

While among the Italians it is Lucio Battisti.

As for poets, on the other hand, I find it very difficult to classify them but I find Cesare Pavese’s poems very poignant.

I believe that “Death will come and he will have your eyes” is one of the most profound poems I have ever read, considering also the fact that they were found by chance after his death.

Is your life also told in your illustrations?

Most of the drawings and what I write to accompany them is a way to tell and make myself known through lines, shapes and colors.

I’ve spent most of my life keeping it all inside. To hide from myself and to fear judgment in fear of I don’t know what.

But now everything I feel, that I live every day, the love for my art and for the people I love, everything that passes through my mind, heart and pea I transmit directly to the tip of the pencil with extreme naturalness.

I first realized that people like me as an artist when I was one of the few artists that Playboy USA chose to publish on its official Instagram page. From that moment on I started to believe even more in what I do.

How would you define eroticism?

For me, eroticism is a place where the mind and spirit unite with the pleasure of the flesh without prejudice of any kind, where the deepest love and the most uninhibited sex poetically coexist.

I realize that many people are still very afraid to experience pleasure naturally eros, this is because they lose sight of the most important thing, namely that sex must be understood as a free, passionate and sensual manifestation of their instincts, combined with a personal and romantic vision of one’s “perversions”.

The best part of the fantasies that are hidden inside each of us, must be lived to the full until the senses are upset and all this without fear. Eroticism is essentially relational and implies, albeit only in the imagination, the presence of the other.

On my return from Berlin, I studied German philosophers and accidentally came across Georg Simmel, a German sociologist of the late 19th century, where he stated that:

“… Eroticism is perhaps the privileged form, the most dizzying and engaging of our life, in all its forms. Sex, for example, is a creative act through which man and woman mold themselves: they do not simply erase the distance between them, but they merge into something unique and irreducible, they give themselves shape.

We cannot love with a single part of our body, not only the genital organs are used, but we remain completely involved. The lovers will be able to separate again, but neither of them will ever be the same again … “.

How does it feel to know that there are people around the world who own your works?

It is something that fills me with pride. Just the other day I sent work to Australia, Russia and Brazil.

Art is perceived in the same way in all parts of the world; Because we may have a different political, sexual or religious orientation but in our intimacy we think and live almost all the same way.

What are you working on right now?

I recently opened my official web page, thanks above all to the help of my girlfriend without whom it would never have been possible: www.alfiomartireillustrator.com

I’m working on the design for an international illustration competition with a very delicate theme, plus I’m reorganizing the online shop to be able to give everyone the opportunity to easily buy the drawings since I am a landslide with the marketing part.

Today it is very difficult to give authenticity to the works that circulate on instagram both because censorship limits the expressiveness of the works very much and also because sometimes we come across pages that plagiarize other people’s drawings by passing them off as originals and this is why many times the risk is taken to make everything uniform and stereotyped.

But luckily there are sensational artists such as YSSA, PETITES LUXURES, APOLLONIA SAINTCLAIRE whom I admire immensely and FRIDA CASTELLI.

I consider their eroticism portrayed in the most sensual and evocative way I have ever seen. When you look at their designs and feel that particular vibration within you, it means that the design has hit the mark.

Frida Castelli – Centimeters between lips about to kiss